The story of buero SCHUPPENWURZ

With the doubtlessly unusual name “buero SCHUPPENWURZ” there is the following to say:

Schuppenwurz (Toothwort – Lathraea squamaria) is parasitic on the roots of hazel and alder, occasionally on beech. It consists of a branched whitish underground stem closely covered with thick, fleshy, colourless leaves, which are bent over so as to hide under the surface. The only portions that appear above ground in April to May are the short flower-bearing shoots, which bear a spike of two-lipped dull purple flowers. It takes up to ten years for it to grow until it blooms for the first time.

In April 2008, Sabine Macht and Michael Fischl met on two cleared mountains in the forest near Frauenau, which were to disappear for a new highway.
At the survey on this special day in april inmidst the destruction surprisingly an exemplar of the toothwort (see photo) was discovered and some more seldom and worth protecting plants like dentaria as well as lung-and miltwort, indicators for healthiest mixed mountain forest. These findings gave some hope of being able to stop the disoriented doing of man and construction authorities.

Both locals were inspired to block these unspeakable roadworks. Already there was a fight going on against politics and authorities, which was lost despite the great medial and passionate public interest of quite a number of citizens (www.das-areal.de). Both of the valuable mountains were flattened during the summer of 2008.

The story turned out bad for the mountains and the real existing toothwort, but at the same time this was the beginning of its virtual presence, since the name of our outdoor bureau was born.

To provide an understanding for the richness and value of nature, as well as a sensitive treatment of the deep relation between man and nature within a individually arranged program or seminar is our aim. 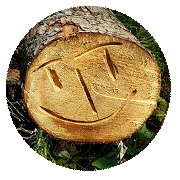